Skip to content
Home/Stories from Camp/Unequipped, in Charge, in China

Unequipped, in Charge, in China

Rock-N-Water has been a place of tremendous growth for me since my volunteer summer four years ago. Both the staff around me and the responsibilities I have been given have pushed me past my comfort zone. However, I recently was put in a situation in which I felt completely unequipped…

It all started when, after a long day of microbiology lab at school, I received a phone call from Rock-N-Water’s Camp Director. I picked up the phone expecting to talk about how I had been growing the past year, or expecting to be granted new responsibilities for the upcoming summer. Instead he asked me if I would like to go to China; Apparently no explanation was necessary. Within less than a week from that day I would be taking a 12 hour plane ride with another guide (Collin Lomax) to teach Chinese-speaking children about leadership and communication. A new adventure company is on the rise in China and Collin and I were tasked with the responsibility to lead a camp and come up with all the activities they would be involved in for three days. I felt like an actor assigned to do an impromptu skit for an audience he knows nothing about in a language and culture he does not understand.

I went to China having the expectation that I would be helping out at a fairly large camp, with a tolerable climate for activities in the outdoors, and that working with the campers would be challenging but not super difficult. As soon as I arrived in China I realized that communication would be a much more challenging task for Collin and I. Our hosts, Cara and Nick did all they could to provide a pleasant experience for Collin and I. They took us out to dinner, explained specific aspects of Chinese culture, and even answered our questions regarding the Chinese language. The first night we rested well, but even at this point we weren’t exactly sure what we were going to be doing at the camp.

All Collin and I knew about the camps at this point was that it was snowing, and there were certain activities offered at the facility for the kids to participate in (archery, ropes course, elaborate playgrounds, zip lining, etc.). I had anticipated playing games with the kids, but I did not understand at this point how difficult it would be to explain complicated team building games to the kids in China. Mind you, it was an interesting group of kids to work with. There were 2 very young boys (both about age 7, and both fairly shy), 1 quieter boy, 1 boy who thought he knew a lot already, 1 very polite kid who even managed to answer questions we asked him, 2 girls who spoke English but really only talked with female leaders and like speaking in English, and one older girl (age 14). With most of the kids, our only form of communication with them was non-verbal. 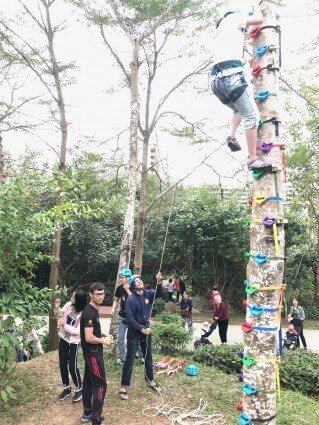 We were learning more about what the camp was about while it was in the process; and sometimes felt like we were being pulled in different directions.  Sometimes it felt like the leaders wanted us to help teach the campers English, other leaders said otherwise. It was kind of ironic that we were teaching about effective communication when we didn’t even speak the same language.

I didn’t know the answers to a lot of these questions, and I’m not sure I do know.

It is incredible that we serve a God who allows us to partner with Him in the missions that He wants to complete. Sometimes those missions are directed at ministering to the people we are trying to reach, but more often God is seeking to minister to our own hearts. I gained a broader understanding of what God’s unconditional love towards us looks like from my time in Beijing. I never considered how much the feedback I receive from those I am seeking to minister to affects my attitude and my self-value. At Rock-N-Water in California it is easy to know that I am appreciated because of the language and culture I understand well, but in China it was difficult not know if what I was doing had any positive impact on the kids. Although God understands our hearts, how much more do our attempts to thank Him fail to measure up to all the praise he is due?

After a snowball fight, one of the kids said something that gave me a glimpse of how God might feel when we thank Him. A Chinese leader translated for me the thanks of of of the little boys, “I love you, I never want to leave you!” The moment was so simple, but I cannot explain how much it warmed my heart in the midst of what felt like confusion and frustration. I have been learning recently that God is full of emotions and that we are granted emotions because we are created in His image. Even when we are feeling unequipped in the places that we have been called to serve, God reminds us (sometimes through our own emotions) that we are equipped with His power through His spirit.