Things You Only Say At Rock-N-Water

We love our cultural lingo. Every culture and community develops their own expressions and words with context-specific meaning that, at some level, is a way we connect with each other. It says, “you know me,” when we can communicate with lingo that not everyone else understands. For example, if you understand ski lingo, you can celebrate with me after I tell you I dropped this rad pillow line the other day. If you don’t know anything about skiing, that probably just sounds like gibberish to you (but, seriously, check out this video.)But if you do know what I’m talking about, I probably have your full attention right now. Most likely you felt some sort of excitement when thinking about pillow lines and perhaps the corners of your mouth turned up into a slight “I understand completely” smile. Depending on your enthusiasm for skiing you might have even started drooling a little… ok, maybe I’m the only one who’s drooling.

In the context of Rock-N-Water, we’ve got tons of sayings, expressions, and words that you hardly ever hear in your normal life. If you’ve never been on an adventure with us, these will probably seem rather odd and random. However, for those of you who have had a Rock-N-Water experience (pun intended), remembering these things you only say at camp could very well be a trip down memory lane. 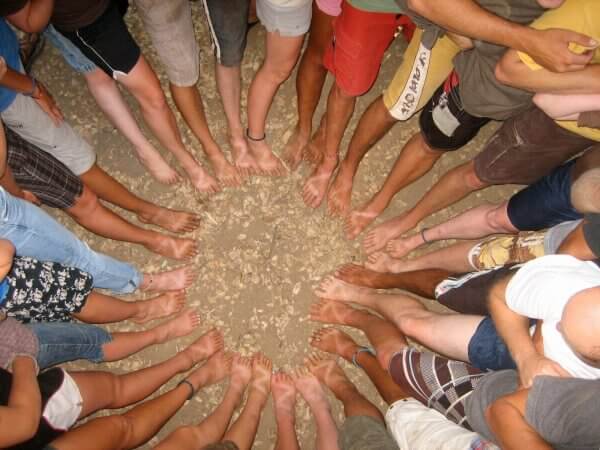 Imagine you’ve just pulled up to camp and you’re being greeted by your guide for the week. You’ll remember some of the dialogue that unfolded in those first 30 or so minutes.

After your guide greets you with, “Welcome to camp!” he begins to open the door to an odd shack-like building and says, “let me show you our experience chambers, they’re a greeeat place to encounter God.” He can’t hold back a cheeky smirk as he reveals the porcelain throne behind the door.

He then proceeds to show you the “one square method” and at the same time, a human-size shark walks out of the stall next door to the sound of a flushing toilet. You quickly pick up that the word “experience” has a completely different meaning at Rock-N-Water then the meaning you’re used to.

In “normal” society, having an aggressive tan line is frowned upon. At Rock-N-Water it’s something people honor you for – “Look how bad Stuart’s Chaco tan is!” “Bad!? Don’t you mean good? Look how awesome it is!” 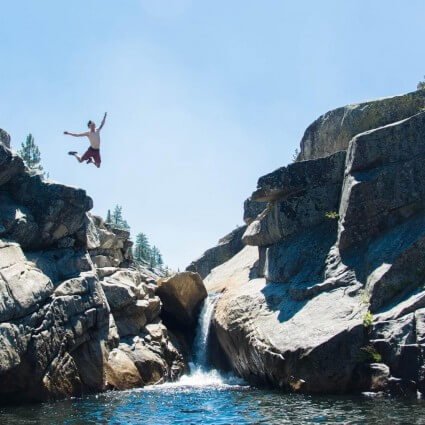 You’ve now arrived at the trailhead or put-in for your day’s adventure and one of your guides points across the canyon or river and says with awe, “wow! Guy’s check out that Ho-Dang!” You look for this “ho-dang” thing while she starts telling you about all the dangers for the day and how to avoid them. Unfortunately, you don’t see such a creature.

She starts with, “the number one rule is no dying!” ** awkward laugh **
Then she’ll tell you about water bottles… I mean “babies” and how “we don’t throw babies and we don’t bang babies against rocks.” She’ll also tell you sand is no longer sand, but instead “SAND IS LAVA!”

If you’re out on a rock climbing adventure she’ll make sure you’re aware of snakes. She’ll help you remember the little jingle that lets you know which snakes you can touch and which ones you can’t. I believe it goes something like, “red on black, friendly jack; Red on yello… Don’t Touch Snakes!

Later on, as you’re scrambling across a playground of boulders, you’ll come upon a guide who is squatting with his back to a boulder and offering you some help. You blink twice because you’re unsure if he actually wants you to do what he’s said. “Just step on me! Yeah right there on top my knee,” he says as he helps you up and over the boulder.

You still haven’t seen a ho-dang.

If you’re going rafting, your guide will not only tell you that dying isn’t allowed but more importantly, what you’ll hear over and over again is, “Stay calm! Feet up and downstream!”

Your guide will do a final check of each paddler and remind you that “You need shoes that will stay on your feet” and that “Everything is going to get wet… EVERYTHING.” After all, this is white watet wiver wafting, not river floating.

And of course, there is always that one participant who seems to be getting himself into trouble all the time. This is where you might hear a guide say, “little Jimmy! ..NOOO!” followed by a splash. Clearly, the guide was unable to anticipate his innocent (and often adorable) ignorance of current reality. 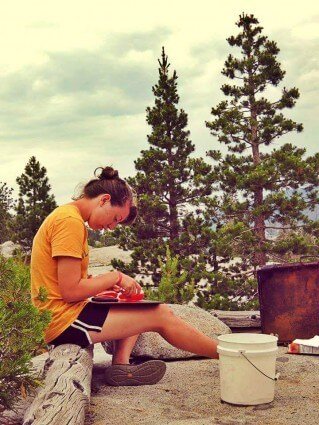 It’s dinner time and it’s far from a “normal” dinner. To start, the guide announcing dinner doesn’t even tell you about the food. Instead, he starts with “Tonight for dinner..” he holds up a circular white disk, “we have Plates!” To which everyone cheers for some reason.

Then, once dinner is announced, and before you can even grab one of those plates, the guide announcing dinner states, “The first table that gets to eat is..” You’re not even sure what he said exactly, but immediately, even one gets up from their table and starts acting like penguins paddling a raft. The most rambunctious table seems to get to eat first.

You finish eating, excused yourself from the table to go have an experience, and as you are walking back to the kitchen you can tell that desert is being served. A guide announces to everyone, “Assume the banana position!” To your unbelief, everyone gets up, and starts jumping and spinning in circles singing, “Baaaaaaa n-n-n-nahhh; n-n-n-nahh; n-n-nuh n-n-nuhh; BANANA BOOOOAT!” Despite the dinner time fanatics, the food and the banana boats were quite delicious.

Throughout dinner and during the free time following it, you hear your fellow campers and leaders say all sorts of strange things. Some say things like, “I thought I was going to die!” while others might add, “Today I went through the birthing canal! I did it 3 times!” *

Other’s say things like, “Are we lost?” Turns out they weren’t. One says she asked her guide, “Was that the biggest rapid?” To which his reply was, “No, we still have Death Fang Falls to go over!” Luckily they never found the falls.

And the most surprising thing of all that you hear your fellow campers say is “Can I help wash the dishes?” At first, you can’t believe it, but then you find yourself joining in and having loads of fun singing songs and laughing while you scrub. 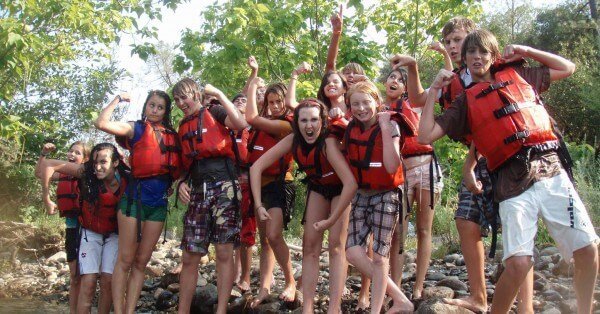 We’re In This Together

As your week at camp goes on you start to notice how much everyone has in common as comments like, “check out my dirt tan!” or “how long has it been since you showered!” become normal.

You’ll remember one time passing your friend with his rubber ducky and shower brush. You remind him that there are no bathtubs at camp, but he replies, “No! I’m going to take my nightly river shower!” He had recently discovered the river-mud-exfoliation technique.

As the sun sinks low on the horizon you hear shouting coming from across the other side of camp. As it grows louder you can tell it is one of the guides yelling “heyyyyy youuuuu guyyyyyyss!!” This is followed by a choir of voices announcing, “GROUP CAMPFIRE!” Amidst all the adventures, group campfire quickly becomes one of your favorite times.

As you think back on your week you begin to gain an understanding of what it means to be “pregnant with a breakfast burrito” and you learn that real stories are not the same as true stories. More importantly, you learn that “if God made it why not play in it!?”

But you still haven’t seen that ho-dang. Final parting words?

This entry is the first addition to our Rock-N-Water Lingo Series. See more posts here.

* for those who don’t know, the “birthing canal” is a rock feature on Evergreen Canyon that one can swim through. It can be intimidating and people typically find it an accomplishment to do so.