Things You Only Say At 49er Fun

As you climb out from the back seat of the car you caught a ride in on your way to the 49er Fun field trip, you’re greeted with a scene that is new to you. Amidst the fresh greenery of springtime in the Sierra Nevada foothills, you see some odd folks who are dressed like they are from over 100 years ago. That’s when you find out that they have, in fact, time traveled from 1854, during the time of the California gold rush, to the present day! 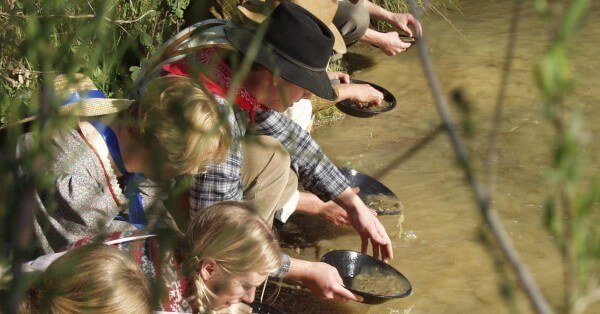 He’s got the gold bug!

“Howdy!” says one of the 49er guides as they greet you and your posse. One of them teaches some fun games while another begins lining up what you always thought were cars into an official wagon train. Apparently, they are actually wagons and not cars.

Once the games are over, a somber silence quickly falls on the group as everyone realizes that the rest of the guides from 1854 didn’t make it through the time field to 2019. Obviously, there is no such thing as a time machine, but the guides are living proof that time fields do exist. They explain, “Time fields open and close often but only time travelers with the right information are able to make it to another year.”

The missing guides are finally discovered, along with the fact that they have clearly been in the hills much too long! Gold fever has overtaken their minds and clogged up their thinking! These guides are crazy and have completely forgotten that “God Is Greater Than Gold.” 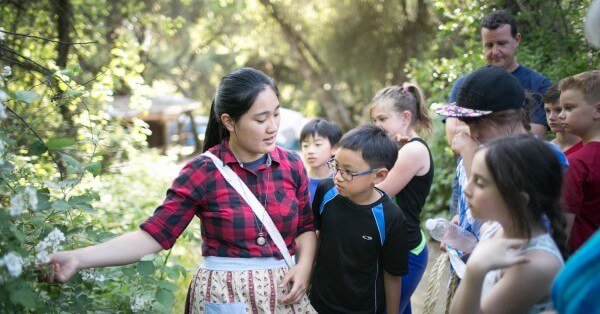 Later in the day, as you eat your lunch, you hear shouts from all over the place such as, “It’s squishy glass!” or “You have silver? Can I have some?” Once lunch is finished, out of the kindness of your heart, you add your leftovers to the collection building up in the time-traveling treasure bucket.

You then take a quick trip to your wagon. Upon your return, you see that everyone has been split into groups and is shouting ridiculous names as loud as they can. You quickly realize your group’s name is the 49er Penguins of Doom and have proven themselves to be the group that will have the most fun today!

Before your group takes off for an adventure in the Gold Bug gold mine, you can hear another guide saying, “I smell manure!” Everyone knows what they really mean is that “Adults are like manure… if they clump up together away from the young’uns, that is!”

As you enter the dark mines you hear your perfectly serious guide instruct everyone “If the water on the ceiling drops on anyone, you will die instantly.” As shrieks of fear burst out from friends around you, the guide corrects themselves and says, “Oh no, I’m just kidding, you won’t die …for at least three days.” 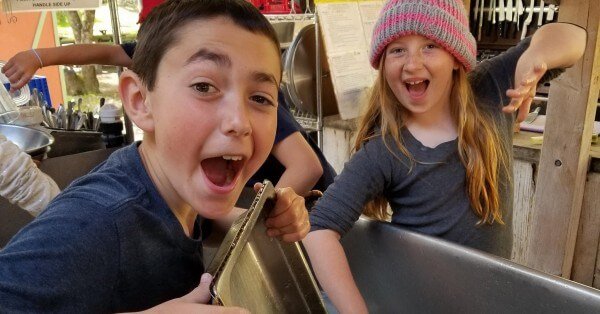 After leaving Gold Bug mine, you hop in your wagons and travel to the 49er camp by the river. Upon arrival, the group gathers with noisy excitement until one of the guides yells out the familiar “Hee!” to which everyone else responds “Haw!” A peaceful silence follows the fading voices.

One of the guides starts to explain the camp guidelines by stating, “Rule #1 is No Dying.”   You’re really not sure what to expect! Next, the cook is introduced, and you can hear her famous greeting, “Howdy folks! I got some real good vittles cooking for y’all.” You have no idea what vittles are, but the food sure tastes great!

Throughout the day, as you and your friends stay hydrated, someone might ask, “May I go have an experience?” They might even follow that up with, “Should I use self-control when I have my experience?” which is definitely followed by a chuckle and everyone responding with “Too much information!”
…and, of course, you know why.

As your first day begins to wrap up, you hear a loud clanging in the distance. Recognizing it as the dinner bell a-ringin’, you rush off to dinner. After you’ve eaten and everyone is washing dishes, your friends shout things like, “Rejected!” and, “I want to put the dishes away this time!”

For the first time ever in your life, you make a run for your own spot in the dish line. As strange as it is, everyone seems to be outdoing one another in clearing tables and wiping down the kitchen. You even hear people yelling out in unison “MORE Dishes!” which is followed by a whoop or holler from the guides.

After everything that has already happened today, you really start to feel like are you in 1854! 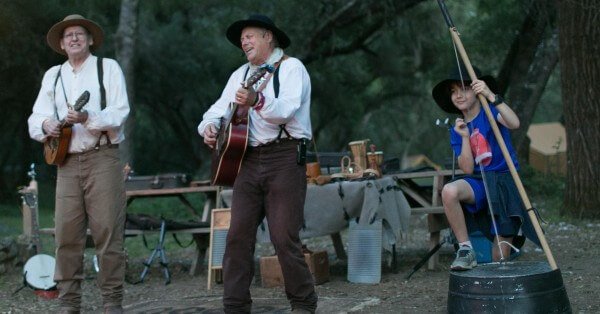 The sun has now set, and disappearing along with it is the heat of the day. You welcome the warmth of the campfire and your friends gathering around you. To your amazement, there is a live band at camp all the way from 1854! And even more intriguing, one of its members introduces himself saying, “I’m a compulsive liar, but everything I say tonight is true.” You’re not exactly sure what to think.

As the night goes on, you enjoy singing along to songs such as Turkey in the Straw, and even get the verse stuck in your head that goes, “…and that little chicken laid me a hard-boiled egg!” Then the dancing starts!

Long after campfire, into the next day and even through the time fields back into 2019, you will continue to use your best Jamaican accent while you sing, “Da moose, …DA MOOSE!”

Of all the things you have learned in 1854, the one thing that you can take with you anywhere, and into any year, is that God is greater than gold. You have learned that though any treasure can take the place of gold in your life, that He is actually the True Treasure and His love cannot be stolen from you. “Store up for yourselves treasure in heaven where neither moth nor rust destroy and thieves do not break in and steal.”

This entry is the second addition to our Rock-N-Water Lingo Series. See more posts here.