The Beginnings of Rock-N-Water

The Beginnings of Rock-N-Water

Have you ever wondered how the ministry of Rock-N-Water started?

The seeds of Rock-N-Water Christian Camps were sown back in the year of 1983. Good friends Craig Lomax and Rich Teter went to river guide school at the age of 16. They learned how to guide at a Christian rafting company on the American River called Paduza’s, run by Darrell Romani.

Darrell had a prayer – as he looked over the campground, he prayed that God would fill the whole campground with Christian youth groups and families. While Paduza’s closed a few years later, we now suspect that Darrell’s prayer would later on be fulfilled through Rock-N-Water. Danielle Jullie grew up as a “Y” kid and surfer girl in Southern California. She later became a director of YMCA camps (one on Catalina Island and another in India) and later married Rich, which is where the story of Rock-N-Water continues. 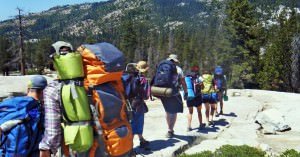 The ministry and business of Rock-N-Water officially began in the year of 1989. Rich Teter and his wife Danielle worked for an inner city group home, Olive Crest, based in southern California and took kids on outdoor adventure trips to the Sierra’s, their old stomping grounds. The kids would get to experience river rafting, rock climbing, and backpacking, a trip that Rock-N-Water now calls The Backpacker Paluza. During this time, Craig, who had a tight-knit friendship with the Teters, had become enthralled with youth ministry at his church.

El Dorado County Parks and Recreation misunderstood the Teter’s non-profit rafting trips as “pirate” trips; individuals or for-profit businesses charging for rafting trips were required to purchase ((River permits technically hold no value and are therefore never technically purchased, but for unofficial purposes you can assume that permit is worth about $1000/weekend use and $100/weekday use.)) use permits with varying commercial capacities. Rumors of “pirate” trips started to float around the community. Danny Lulla, owner of the rafting company River Runners, pointed the Teter’s toward the purchase of a small, inexpensive permit (King Fisher River Trips). Rich and Danielle invited Craig to join them in the purchase and in the pursuit of an outdoor adventure ministry designed to meet the needs of Christian youth groups. They each scraped together $5,000 to get things started which included the purchase of three boats worth of used equipment and a permit allowing them 25 midweek and 2 weekend user days… it was December of 1989 and Rock-N-Water was born.

About the Author: Rock-N-Water Christian Camps