Below Normal: February rafting flows of 1,300 cfs on Saturdays and Sundays with “fish flows” of 200 cfs.

The South Fork of the American River water year forecast as of February 8, 2019: Below Normal

The February Water Supply Forecast Report for 2019 was released Friday February 8th at 4:29 PM, with the Water-Year forecasted for Below Normal. Specifically it’s forecasting the Full Natural Flow (FNF) of the American River below Folsom at 2.245 million acre-feet (MAF), with Below Normal being considered ≥ 1.7  MAF and < 2.6 MAF.

With the vast feet of snow that have falling in the Sierra Nevada mountains over the last couple of weeks, it might sound odd that they are only forecasting Below Normal. However, we must keep in mind two important facts. 1: Until the late January storms we have been having a relatively dry winter, with the state as a whole only at 69% of average by December 31st. 2: The second of these recent storms came through the region at the start of February, just missing being included in the measurements for this report – we’ll see how that storm measures up with “normal” when the March report is released next month. But happily, as of February 7th, Central California’s snow water content is already at 87% of the April 1st average, and 126% of average for Feb 7th – so it’s a good chance we’ll see the March report bump us into Above Normal.

Since the 2017-2018 water year ended with an official designation of Below Normal, this new forecast of Below Normal will not result in any changes from what was previously being followed for February flow.

The current forecast has an 80% probability range of 1.670-2.990 MAF, which leaves a the door open for dropping to Dry (<1.7 MAF) and a decent chance for bumping up to Above Normal (≥ 2.6 MAF). Keep in mind though that our brains are terrible at truly understanding what 80% probability means. It’s better to consider that if this exact forecast played out over 10 different years, one of those years would fall below that range, and one of those years would increase to above that range. 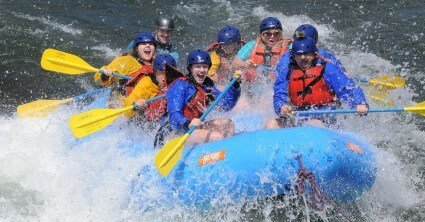 The February forecast will be used to determine minimum guaranteed flows from February 11th through Mid-March [The new forecast takes effect 3 days after it is issued. Each forecast is typically issued around the 8th].

If the forecast of Below Normal holds, the flows will be as follows.

The next forecast should be released around March 8th, with it taking effect 3 days after issuance.