Dry: March rafting flows of 1,300-1,500 cfs Friday through Tuesday. With only 200 cfs guaranteed on Wednesdays and Thursdays.

The March Water Forecast Report for 2018 was released Thursday March 8th, with the Water-Year forecasted for Dry. Specifically it’s forecasting the Full Natural Flow (FNF) of the American River below Folsom at 1,350 million acre-feet (MAF), with Dry being considered 900 MAF to less than 1,700 MAF. This is a significant drop from the previous month’s forecast of 1,750. The biggest change will be no guaranteed Thursday water in the coming months, with no significant change to summer flows[1. Just a reduction from 6 hours on Saturday and Sunday to only 5 hours of flow].

The current forecast has an 80% probability range of 1,080 – 1,605 MAF, which would keep us firmly in a Dry water year. However, for comparison, the previous period had an 80% probability range of 1,350 – 2,280 MAF. The forecast should be more accurate as we move forward, but the change from 1,750 to 1,350 speaks to some significant differences between the previous models and what actually happened in February.

The February forecast had predicted 230 MAF of unimpaired runoff during February, however we only saw 98 MAF. That’s only 42.6% of what had been forecasted. For March they’ve only made a small adjustment down, predicting 299 MAF versus the previous expectation of 340 MAF for March unimpaired runoff.

The March forecast will be used to determine minimum guaranteed flows from March 11th through Mid-April[1. The new forecast takes effect 3 days after it is issued. Each forecast is typically issued around the 8th] 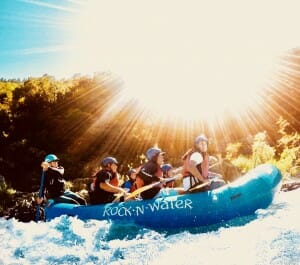 If the forecast of Dry holds, the flows will be as follows.

The next forecast should be released around April 10th, with it taking effect 3 days after issuance.

Here are some reservoirs in the Upper American River Project (UARP) that might be of interest.

Note: This page is updated with current forecasts as they become available. Previous forecasts are archived for reference.