tl;dr: Very Very Wet. Total rainfall might exceed  1982-1983, but current snowpack is much lower at this point in time.

The April Water Report was released Monday April 10th, with the Water-Year forecast expectedly solidly in the Wet range. Specifically it’s forecasting the American River below Folsom at 7.435 million acre-feet (MAF), with 3.500 or greater being considered Wet[1. An increased forecast of 0.005 MAF more than forecasted in March 2017]. In fact, we’ve already had 5.028 MAF of unimpaired runoff, so even if the heaven’s remained dry through the end of this water year, we’re already locked in on it being a Wet classification.

Rainfall vs Runoff vs Snowpack

There has been a lot of talk in the media as of late, of different regions setting all time rainfall records. There likely will be more of those reports to come as more and more stations beat previous records with more rain likely to fall prior to the end of this water year on September 30th. While we will likely see significant spring and early summer flows, to draw comparisons to the 1982-1983 water year are, in my opinion, inflammatory and more hype than fact. I’m not saying we won’t see higher flows than we did in those years, I’m saying that to say “we will” is an oversimplification and not a certainty.

While this year will likely go down as the highest water year on record, much of that water has already moved into the ocean. Specifically, the unimpaired runoff for the American River below Folsom from Oct-March is 5.028 MAF this year versus only 3.335 MAF for the 1982-83 water year.[1. April 1983 Bulletin 120 page 9 vs April 2017 B120 page 5]

This can be most clearly seen by looking at the current California snow water content: 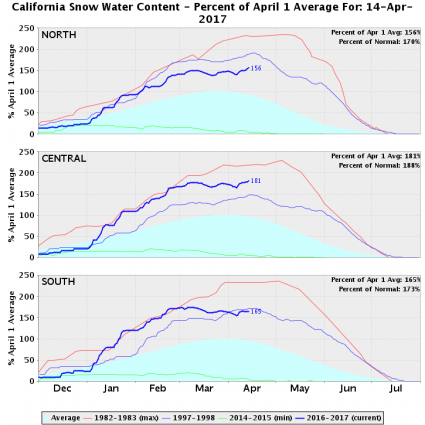 The South Fork of the American River is part of the Central California breakdown. As you’ll notice, we currently have significantly less water on the mountains above us than we did in ’82-’83.  But we do have a bit more than we did in 1997-1998.

While the April  forecast is technically only valid until around May 12th, it’s a reasonable assumption that the following will not change barring an act of congress[1. I’m not intending to be flippant. It really would take a literal act of Federal Congress to change things.].

It’s worth a reminder that how quickly or slowly the snowpack melts could result in significantly higher flows during the remainder of Spring.

The next water year forecast should be released around May 9th, with it taking effect 3 days after issuance.

With a high snow pack and reservoirs on the Upper American River Project (UARP) filling up, here are some[1. There are many more reservoirs in the system, these are just the most impactful.] quick water storage related numbers[1. For reservoir storage, current elevation is a hard number, while current storage is a rough calculation based on estimated capacity at that elevation. Natural sediment deposits over time, and from high runoff/melt conditions, can modify (sometimes greatly) actual capacities.] that might be of interest.

Note: This page is updated with current forecasts as they become available. Previous forecasts are archived for reference.