tldr: Final measurements place 2016 as a Below Normal water year for the SFAR.

(for point of reference that’s 1.6 billion gallons of water. Or more literally a 1 acre swimming pool just under a mile (0.95 miles) deep.)

What does Below Normal Change? 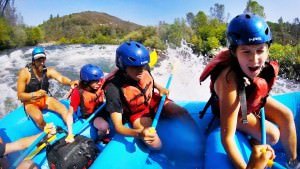 Happily not much at this point in time. Obviously we’ve got a little less water than we’d like to have. But as far as white water rafting is concerned, this will have little practical impact on river rafting on the South Fork of the American River.

October’s minimums are based on the final forecast, so October will continue to operate as if we were in an Above Normal year. November through the start of February will still have guaranteed raftable flow on Saturdays and Sundays, but we’ll see minimums of 1300 cfs versus 1500 cfs.

Note: February flows will be based on Below Normal levels until the first 2017 Water Year Forecast (Bulletin 120) is released around February 7th.

About the Author: Jansen Wendlandt