Rock-N-Water may have been born in the 1980’s, but the first official year of Rock-N-Water taking groups on Christian adventure camps was the summer of 1990. 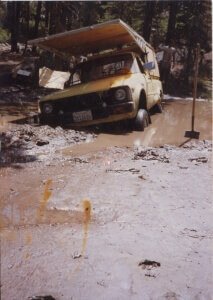 Rich had a yellow 1981 Toyota 4×4 pickup truck that was outfitted to become Rock-N-Water (equipment, food service, and even advertising – the pickup did it all). Hinged panels were mounted above the bed that in the up position would hold gear and “advertise”. But then when the side panels were lowered, they became serving tables off the sides of the truck ((These boards are still a part of meal service at Rock-N-Water – look under the serving tables the next time you are here, and you’ll see the original Rock-N-Water logo.)). For the first year of trips food was prepared beforehand in the basement of Craig’s mom’s house (Thanks Emma!), where it was packed into 5 gallon buckets, that once emptied would serve as cutting boards and seats. We didn’t have a base camp at that time, so trips were run out of the local campground of Camp Lotus.

Craig recruited his girlfriend Marianne (affectionately called Maya ((The other reason we call her Maya is that us Americans rarely seem to be able to properly pronounce “Marianne” in a way that does the Swedish language justice.))), who was visiting him from Sweden, to go door to door with him visiting local campgrounds to see if they could find people that wanted to go rafting. It may not sound like a great way to spend your time visiting California from Sweden, but she loved it, and they said “I Do” later on that Fall.  Their efforts, combined with many phone calls and individually personalized brochures, that were practically hand delivered to churches, resulted in 12 youth groups experiencing God’s creation through Rock-N-Water’s Christian Summer Camps that first year in 1990.

Each of those 12 groups received a very customized program that was personally tailored just for them – something that still continues to this day. Sometimes there would be skits on the riverbank while they were getting ready to raft. When the adventure was finished and they were back at camp there would be a campfire and teaching.  Danielle was a masterful speaker and Rich, at times, seemed to be miraculously led by the spirit, and was always very insightful.

Fast forward to the mid 1990’s when Craig was working at the present location of Rock-N-Water. He turned and gazed over the camp brim full of people doing fun and crazy things after a full day of adventuring out in God’s creation. All of a sudden he recalled the words that Darrell Ramani had prayed so many years before. “That old prayer sneaked up on me and slammed me on the back of the head,” he recounted. Humbled, he realized that God had used his own vision for Rock-N-Water to answer Darrell’s prayer. Rock-N-Water was filled with Christian youth groups, families, all sorts of people, hearing the good news of the Gospel and going home with changed lives.

About the Author: Rock-N-Water Christian Camps