The water was stunning once I had a chance to look at it. It flowed peacefully, meandering, creating its own world. Not a droplet strayed from the path, joining together to create a gorgeous river.

Slush, slush, slush. The liquid shimmered, casting the sun’s heavenly rays far and for all to see. Though clear, it seemed to hold the wisdom of the people who came here, for the centuries and centuries it existed. As war, anger, joy, and bliss was spread throughout the ever changing world, the river stayed the same, humming a melody that we simply couldn’t understand.

I had come to Rock-N-Water with the rest of my ninth grade peers, and so far, I regretted it. I was thrown into the wilderness with people I didn’t know, with any sort of communication to the outside taken away, and told to go out and socialize. It was hard to have fun with everyday being a new challenge, a new reason to miss the sweet, cozy hugs of home.

Presently, we were out on a canyoneering trip. For the last four hours or so, we had been climbing and jumping over rocks and all sorts of nature, and frankly, my body was already incredibly fatigued. After wolfing down a meal, we were given quiet time: a period to talk to God and think about his wonderful creation. I looked around for a spot to sit down and ponder.

I gazed at the river. Just as it was beautiful, I couldn’t stand how loud it was. To me then, the river’s serene humming was a bombastic marching band, only causing distraction and annoyance. I found a crevice a few feet away from the river. Plopping down, I sighed, grateful for the rest after the harsh work I had already done that day. I then let go of my mind, I let it wander and grow freely.

Now and then, I considered myself agnostic, but wanted to lean on Christianity to answer some of my desperate questions toward the world. Was “God” really listening? What sort of reason was there to believe? I’ve never seen him. I’ve never talked to him. I’ve come far enough by myself. I was already moody from canyoneering, and these thoughts failed to make anything better at all. So instead I looked all around me at the stunning nature. 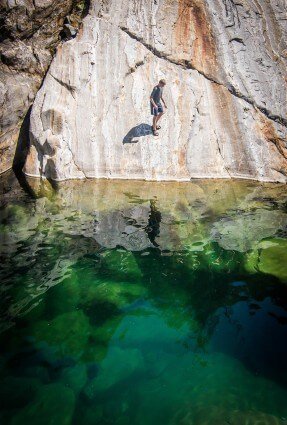 The trees, some green, some brown, some short and stumpy, some tall and proud- they waved in the air, murmuring their song. Swish, swish. The birds, though none were in my view at the time, chirped joyfully. The occasional ruffle of feathers eventually blurred into the background. They, too, sang their own song, tweedling and dancing to the beat of their own drum. The water I found incredibly disruptive earlier, suddenly became music to my ears.

I realized I could do the same. And so, I prayed. I prayed to God, whether he was out there or not, thanking him for my parents, my friends, for those who loved me and supported me. I asked him to watch over me, to rid me of my suffering and pain, to give me motivation to go on, for the wisdom I would need in my coming years.

I may be uncertain now, and there is no doubt I will be in the future. But nature, all of it, played to their own songs, so why couldn’t I do the same? I’d take it slow, basking in the sunlight that I felt burning my legs, my neck, my head, and my hands – trying different instruments as I found my own as well, because right now, there is no need to know.

About the Author: Campers

Stories from campers of Rock-N-Water