Last Friday, Jan 17 2014, California Governor Jerry Brown declared a drought emergency for the state of California. News outlets and the like were quick to respond with headlines like, Hundred Years of Dry ((Time – Science & Space)), California’s drought emergency ((Los Angles Times – Opinion)), The Drought is Back in California ((Rush Limbaugh)), Historic California Drought ((The Christian Science Monitor)), and my favorite: Driest California in 500 Years? ((Daily Beast)). I’ll leave it to you to sift through the stories and decide for yourself just how bad things are. I want to talk to you about a very specific part of California, the watersheds of the western slopes of the Sierra Nevada Mountains.

UARP sure sounds a lot better than, ‘coordination of human structures preventing the natural flow of water while flooding countless acres of natural wilderness habitat’ project. Think what you think about the upsides and downsides of dams ((I’m personally on the fence when it comes to dams. I see them as a beneficial necessity in the world we live in, and also as a sad reminder of the damage our footprint leaves on the world we live in.)), the fact is, we’ve got them. And when it comes to the South Fork of the American River (SFAR), and the Middle Fork of the American River (MFAR), we’ve got a lot of them ((The UARP is technically focused on the SFAR and not the MFAR, and actually redirects some water that left uninhibited would normally flow into the MFAR, but both have a strong dam/reservoir system and the differences between the two rafting rivers can be mostly ignored for this discussion)).

Why release water for entertainment?

Simply put, they don’t. The primary purpose of the dams is for power production ((Though short and long term water storage and flood management are close seconds)). With or without rafting, the dams will release water for power production almost all year long, especially in the hot summer months when there are higher energy demands. What the rafting community has done, is to work with the dam operators to help maximize the usage of the released water.  The greatest energy demands are typically in the afternoons ((when temperatures peak and when automated air conditioning systems start cooling down homes in preparation for the return of their occupants, while their occupants are simultaneously still drawing plenty of power at their respective work locations)). Without the cooperation of the dam operators, that water would flow down the raftable sections of the SFAR and MFAR in the late afternoon and into the middle of the night. Not very helpful for commercial rafting.

How one dam makes all the difference

However, just at the top of both the SFAR and the MFAR whitewater sections there is a dam with a relatively small reservoir behind it ((again, there is one above the SFAR and a different one above the MFAR, it’s not one dam on the top of both)). The size of the dam and the storage that it holds make it less ideal for hydroelectric power production, and far more ideal for regulating the timing of when raftable water is released on the river section below it. So, with great cooperation of the dam operators, this dam holds back the afternoon hydroelectric water release until the following morning when it can be reliably released for whitewater rafting during more ideal recreating hours.

What this means for Rafting 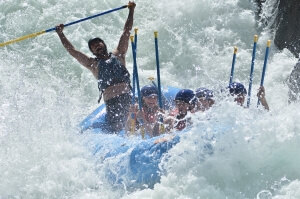 This means that even in the worst of the worst water years, a Super Dry year, we have at least 5 guaranteed days a week of great water for whitewater rafting all summer long on the South Fork of the American River ((The Middle Fork of the American River has even better water)). What do we lose? We lose a guarantee of raftable water flows on Tuesdays and Wednesdays. While sad, with all the other adventures that Rock-N-Water Christian Camps offers, we are able to adjust how we book trips and what adventures we plan to do on given days so that we avoid the need of rafting on those days. But even then, ((and for a variety of other factors including the simple fact that power demands continue even in a drought)) no guarantee does not mean no raftable water, it just means we can’t count on it on those days.

But yes, it would be good if we got some more precipitation

Now let me close with this final reminder – yes, California needs more water. And depending on where you live and visit, you might experience that need more than others. And yes, the drought requires that we all do our part and replace our wasteful daily habits with ones that support water conservation. But when it comes to going whitewater rafting in California on the Middle Fork or South Fork of the American River, we’ll still be having plenty of fun this year.