During my middle school and early high school years, our youth group would make a summer trip to go out whitewater rafting on the American River.  This was before I had even heard about Rock-N-Water and when my dad was the only one in our family who knew how to guide, compared to the four of us now.  In previous years, we had asked guides from different companies to lead our trips alongside my dad, and this one year we picked up a Rock-N-Water guide to take us down the river.  This particular guide was about the same build as Thor in the Avengers movies, or at least he seemed so at the time to my middle-school self.  He also had about the thickest Irish accent that I had ever heard; his name was Gareth.

A day on the river

I don’t remember all that much about our day out on the river, because I hadn’t made it in his boat for that particular adventure.  There were a limited number of spots in each raft and all the older kids wanted to take a ride with the Irishmen.  They wanted to know more about him asking questions like, “So…why aren’t you wearing a kilt?” to which he would respond something like, “all the kilts I tried wearing were a wee bit too small” or they’d ask him, “c’mon just try one blackberry?” and he would reply “not on yer nelly, I only eat me good meats and potatoes.”

Later that evening, we had started to wind down from eating pizza as it was our traditional meal at the enof summer camp.  Two of our leaders started to talk about different food challenges they had heard about and as young middle schoolers and high schoolers, we got really into the topic.  The guest speaker for that week, Will, a youth pastor from a different church, discussed with my youth pastor about how it is ning how the human body can’t withstand that excessive amount of lactose within such a small time period.  Gareth was determined to prove Will wrong after overhearing the conversation, and immediately sid he’d do it.  Will realized what he had said and suddenly wished he hadn’t said anything, because the next thing you know the whole youth group was cheering poor Gareth
on. 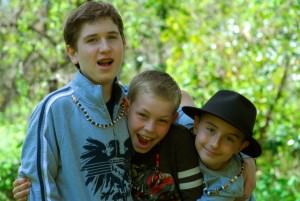 Gareth was making great progress and had downed ¾ of the whole gallon when he came to a halt.  Soon enough his stomach began to churn and his eyes got really big.  Suddenly there was an explosion of both pizza sauce, soggy bread, and a whole bunch of milk.  Gareth didn’t let it stop him for impossible to drink a gallon of milk, because sure enough he picked up the jug again and downed the rest.  I can tell you my desire to eat pizza diminished quite a bit after watching Gareth have just about as much as went into him come out of him.  Interestingly enough, the things I remember most from that trip were not going down Hospital Bar or Satan’s Cesspool, but rather this ridiculous story of an Irishman and a gallon of milk.

I don’t know why I remember the things I do.  Maybe it was his accent, or his Thor-like appearance. Or, it could have been the way he said that he’d do it and then did it.  I want to be a man of my word, and sometimes I claim to have forgotten a commitment when I’m really just trying to find an acceptable way of not following through.  Although I like to think I will accept pretty much any challenge, when it comes to facing real-life obstacles, my mouth will agree to something I haven’t fully accepted.  I don’t think Gareth knew exactly what he was getting into when he agreed to drink, but one thing I know for sure is that God knew exactly what he was getting into when he made every single one of his promises to us.

God’s Promises to His People:

After God told Moses that he will not be able to enter into the promised land, God gave these words to Moses to speak to Joshua.  Joshua had been feeling unfit and afraid of the trials that where ahead of him, and so Moses reminds him in Deuteronomy 31:6, “ The Lord himself goes before you and will be with you; he will never leave you nor forsake you. Do not be afraid; do not be discouraged.”  The author of Hebrews later refers to this verse in Hebrews 13:5.  God continually reminds us that his promises are everlasting and He will always follow through.  Better yet, God tells us of the Savior to come in the Old Testament.  Psalm 22 tells us of the pierced hands and feet that Jesus would later endure.  Isaiah 53:10 also tells us…

“Yet it was the Lord’s will to crush him and cause him to suffer,

and though the Lord makes his life an offering for sin,

he will see his offspring and prolong his days,

and the will of the Lord will prosper in his hand.”

God’s plan to redeem us to Himself was not forgotten.  Not only did God tell us what he was going to do, but he actually did it.  His suffering on account of us was far greater than a stomach full of milk, and He managed to fully complete the work He set out to do.  If God was able to sacrifice his one-and-only son to give us the opportunity to say yes to Him while we were still His enemies, I can’t think of any other promises that he won’t keep.  Praise God!