Only 10 percent of kids nationwide are getting outside on a daily basis according to a recent nationwide poll taken by the Nature Conservancy (Update September 2018: The Nature Conservancy no longer has the “Kids In Nature” poll results available online). As this generation grows increasingly dependent on technology as a frequent past-time and entertainment form, studies show that people are making less of an effort to move away from TV and computer screens and seek leisure time out of doors. In a society that expects–almost demands–us to remain couped up while working, studying, etc., why don’t we make more of an effort to get outside as a means of recreation?

Health and the outdoors

According to an article published by the Harvard Health Letter[2. https://www.health.harvard.edu/newsletters/Harvard_Health_Letter], the benefits of getting outside appears to be multifaceted in improving one’s health both physically and psychologically.

Two of the benefits, as noted by this article, include:

The combination of physical exercise and the great outdoors is a recipe for better health  for both our body and mind.

What about our soul? What benefits does being outside create for the soul? 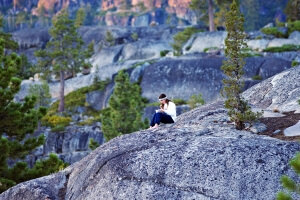 Within the Biblical texts, nature has been used as a means of praise for God’s omnipotence, as a metaphor of His faithfulness and a tangible manifestation of His creative grandeur. So, what then can getting outside do for the spiritual aspect of ourselves?Psalm 19:1-3 says,

“The heavens declare the glory of God; the skies proclaim the work of his hands. Day after day they pour forth speech; night after night they display knowledge. There is no speech or language where there voice is not heard.” (NIV)

God uses ALL OF HIS CREATION as a tangible representation of His glory. Now, how’s that for a visual? I think it is safe to say that God wants to get our attention, that he wants to captivate us by the beautiful, powerful and creative aspects of His character manifested through nature. And what is our response more often then not?

Let’s face it: God is jealous for our attention. Have you ever been captivated by a sunset? Or stood in awe of a colossal peak? Or simply felt joy when birds sing and flowers bloom? I think it is safe to say that He uses His creation as a means in which to remind us of His presence and at the very least, remind us of how deserving He is of our praise!

Get outside. I dare you to put down the phone, computer screen, or whatever else is keeping you couped up inside. It will benefit your body and mind to move and enjoy the sunshine, but more specifically, I venture to say that it will also inspire you to be more aware of God’s character manifested tangibly before you for your enjoyment. So, go enjoy it!