I didn’t realize how closely associated fire and flood could be… But then as I looked into things a little more I found that there was a third word being added to the mix that initially confused me even more: Straw. Specifically Rice Straw, but lets start with the fire.

Starting September 14, 2014 the King Fire would burn just under 100,000 Acres in a little under a month (National Coordinating Wildlife Group incident #4108). With some of the locations that we visit in the path of the fire, we kept a close eye on it’s progress. In the end, only one of our canyoneering locations (Ladybug Canyon) was overrun by the fire, with a second location being spared by less than a mile.

So how is Ladybug Canyon? Unfortunately we really can’t say yet. With all the instability that a fire brings, a large region is still closed to all public access while the Burned Area Emergency Response (BAER) team works the scene. We suspect that the 2 mile dirt trail we take to get to the river got hit pretty hard, so the hike to the river will likely be a bit hotter and a little less beautiful. But the bottom of the river canyon (where we spend the most time) should recover quickly, since most of the vegetation is seasonal anyways – getting washed away during winter snow melt, and growing back  in the spring. Unfortunately, the biggest problem isn’t actually anything to do with the areas we hike, but rather about the roads we use to get there. 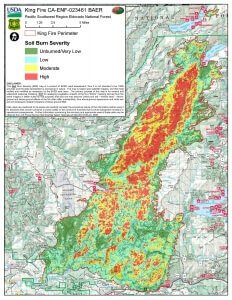 When a forest fire burns ((yes, or any fire really)), the temperature and the height of a fire can vary quite a bit. Some fires burn through an area leaving the soil vegetation almost completely intact. While in other areas a fire will burn so hot and low to the ground that significant damage is done to the below ground ecosystem. The map at right is a rough estimation of the Soil Burn Severity (SBS) from the King Fire ((To emphasize the disclaimer on the map itself, the SBS map is not assessing vegetation impact, so an area of low SBS might still look completely scorched from above the ground. However, it’s a safe assumption that Moderate to Severe SBS areas are likely totally dead above ground as well.)).

When the SBS is high, not only is vegetation removed but also the stability of the soil structure can become compromised. This results in changes in the ability of the soil to absorb rain (like the water droplets in the image at right) and dissipate energy from rain water surface runoff. 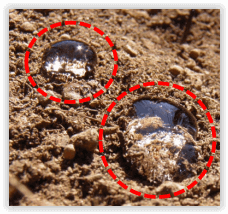 What’s that mean? A higher likelihood of erosion, landslides, flooding, and larger amounts of sediment running off of hills and into the river basins below. While sediment may seem like the smallest of these issues, high sediment can lead to clogged drainage culverts. Once clogged, the water will divert onto and under roads, potentially leading to significant road damage.

So how do we minimize this potential damage? Clean out and inspect culverts and ditches, remove berms, add log erosion barriers, and aerial mulching. 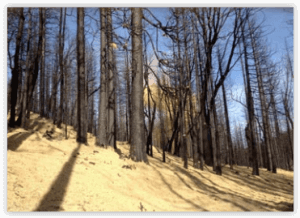 I too never realized that aerial mulching was a thing, but apparently that’s where the rice straw comes in. They’ve got helicopters dropping chopped up straw over areas with a serious risk of erosion. It’s a rather impressive operation, and they’ve been nice enough to provide some photos of the work. They truck up large bales of straw, inspect it for weeds, chop it into 4-8 inch pieces, and then use a helicopter to drop the mulch – with a single helicopter treating about 80 acres of land each day.

It looks like the King Burn area is going to be closed until the spring as they work to clear the hazards from the area, and shore up the hill sides (and especially the hill side roads) from significant damage from what will hopefully be a good water year, full of light regular rains and not a lot of deluges. In the mean time, we’re making plans as if we won’t have access to Ladybug canyon in 2015. So we’ve been actively exploring new canyoneering locations and have adjusted our office booking procedures to ensure we don’t run into any overcrowding in any of the remaining canyon’s that we’ll be canyoneering with youth groups in 2015.