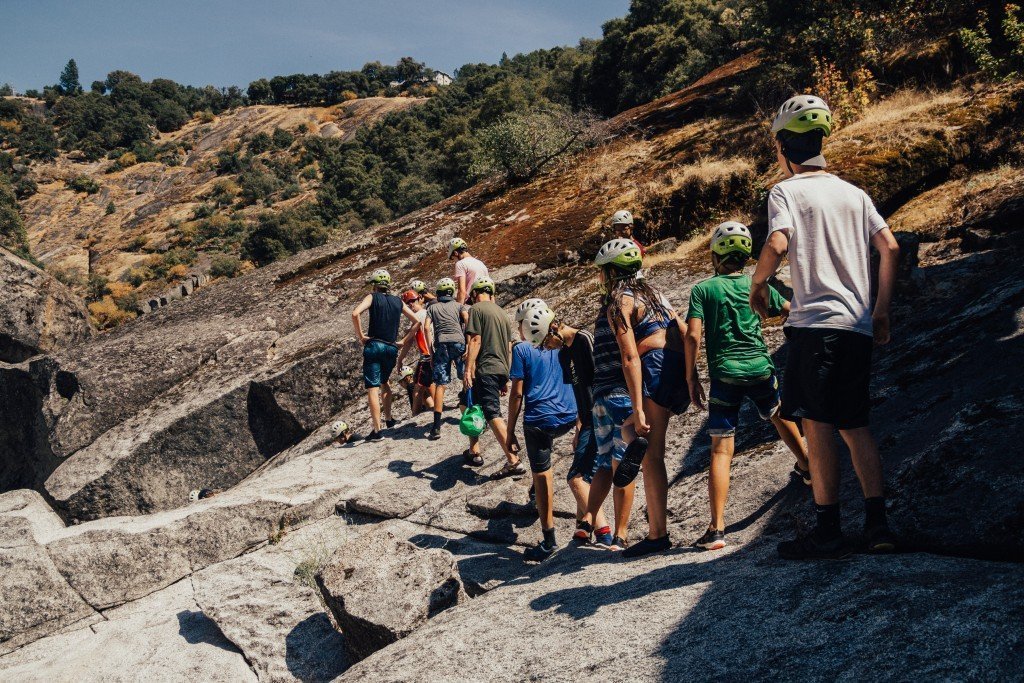 Have you ever had an adventure that turned into a misadventure?  Well, today I want to tell you a story…

It’s not an epic story of adventure, but rather a story of an unfortunate misadventure.  But it was an adventure nonetheless, and it’s a day I’ll never forget.

Let’s start at the beginning.

It was the first day of the most exciting and challenging summer of my life. I was a part of Rock-N-Water’s guide school in 2019.  Guide school is pretty much what the name says; An intensive, hands-on, course to learn how to be an adventure guide.  This course covered everything from canyoning, rock-climbing, and rafting.  There were seven of us in guide school that year and Will Graham and Eden Morlet were the leaders.

During the winter and spring months, I had been counting down the days to guide school and it was finally here! Our first day was going to be epic!  At least, that’s what our leaders told us.  The plan was to explore a canyon called Eagle Canyon that hadn’t been open for many years due to low water in the previous years.  All of us were excited and aching for the adventure to begin. 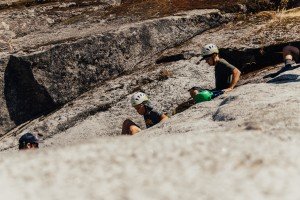 When we arrived at the place we had to hike on the trail for a while before reaching the canyon.  It was a hot summer day but the promise of finding water kept us going.  We were all in good spirits and full of energy.  But as we began walking it soon became clear something was wrong.  Our leader, Will Graham, was not sure which way to go to find the canyon.   The heat was beating down on us and all of us were tired and sweaty but we were still determined to find the canyon. We hiked one way, then hiked back.  I saw the same landmark multiple times and then it struck me “Oh, great, we are going in circles!”

Suddenly we heard a sound.

It sounded kinda like a mix between a baby’s cry and a scream. It was definitely coming from an animal. But what kind of animal makes that sound?  After hearing it a few more times we concluded it was a cougar that was in distress.  I’ve never seen a wild cougar but I’ve heard my share of horror-like stories of cougar encounters.  A sense of fear shot down my spine, but I did my best to ignore it and keep on walking with everyone else.

As we kept walking the screams grew louder.  My heart began beating faster.  We were able to pinpoint the exact spot where the cougar was and it wasn’t too far away from where we were – there was only a small pond separating us from the distressed cougar.

Still determined to find the canyon we walked on, ignoring the cougar sounds.  But the next thing we knew we were were now on the other side of the pond.  The same side that the cougar was on! A loud scream came out of the trees next to us. We all halted.

There was no doubt that the cougar was in the trees next to us.

Will looked at us all and said, “If anyone wants to see a cougar, grab a rock and follow me.”  I don’t know what came over me in that moment.  I reached down, grabbed a rock, and slowly walked with everyone else towards the sound of the screams.  Was I crazy?  I felt reassured when I saw that most of the group also came to see the cougar.  As we approached the spot where we believed the cougar was, we heard a loud thud.  As if realizing for the first time how foolishly close I was to the cougar, I ran back up the trail.  Everyone else followed suit.  That cougar was just a tad bit too close for comfort.

All of us were sad that we didn’t see the cougar, but also relieved that we didn’t see the cougar.  We continued walking the same trail over again, each of us feeling more discouraged by the minute.  Finally, because we were so desperate, we found a small creek and decided to hike down in it to see if it would lead us anywhere.  Filled with excitement, we all scrabbled through thick branches and thorny blackberry bushes. Suddenly, Will told us all to stop.  He had heard something a couple of feet in front of us.  “Everyone, grab a rock and put it in your pocket,” he said, “I think the cougar is in front of us.”  Trying not to be afraid, I quickly found two rocks for my pockets.  Thank the Lord, I was wearing my shorts that had pockets on them!

Sadly, the small creak was not the canyon we were looking for, but thankfully it didn’t end in an unwanted cougar encounter.  What I so find funny about this story is that I kept those rocks in my pockets for quite a while after we got back onto the trail.  All of us still had rocks in our pockets and one by one, as we became more positive that we were well away from the cougar, we slowly took the rocks from our pockets and dropped them on the ground.

To bring this story to an end now, I must conclude that we never did find the canyon.  We eventually found another creek to explore for the rest of the day.  It was a disappointing day to start off the guide school of 2019.  But now whenever I look back on it I can’t help but smile.  I smile at how close we came to having a cougar sighting and how silly it must have been to see a group of people randomly dropping rocks from their pockets. I know now that if I ever have a close encounter with a cougar again, I am going to make sure to have rocks in my pockets.  I don’t know if any of us knew what we would do if we did see that cougar so it’s probably a good thing we didn’t actually come face to face with it.  But the close encounter definitely made our day quite exciting and we came home to camp that day with quite the story to tell. 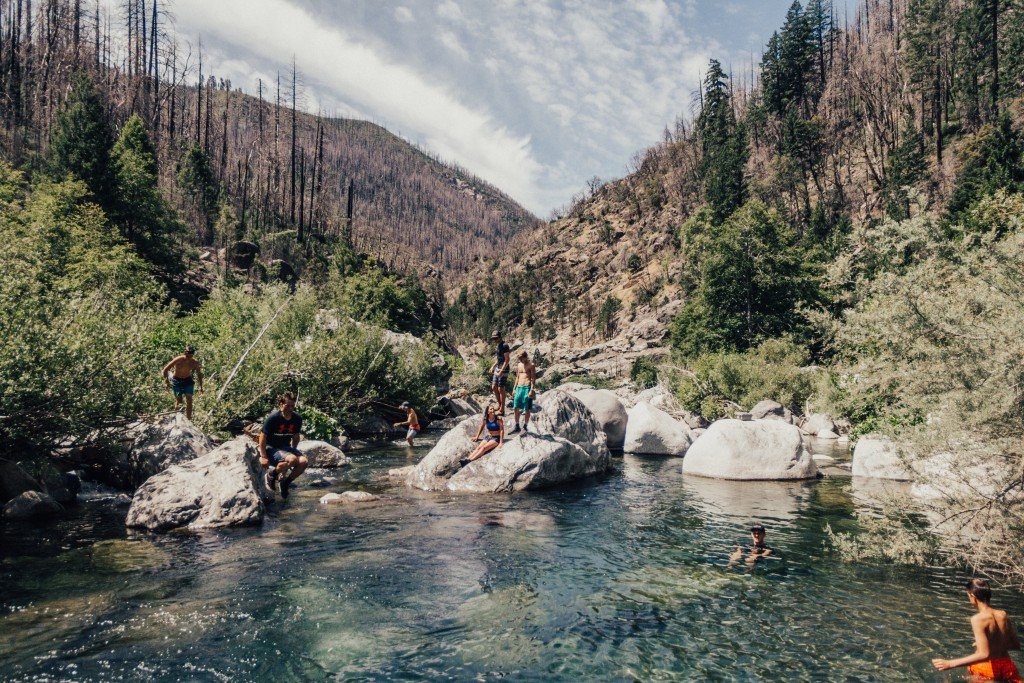 This story is a reminder that sometimes we have adventures that don’t go how we plan.  Rather than let these misadventures discourage us, we can choose to make the most of them.

On our first day of guide school, we didn’t accomplish what we planned to do, but we still got out and explored. Our day took many unexpected turns, but it was a day none of us will forget.  We came back with stories worth telling about walking endlessly in circles, almost seeing a cougar, and did I mention the potatoes we found in our lunch instead of apples… (that’s a story for another day).

Do you have any adventure stories that turned into misadventures?  We’d love to hear about it.  Share your story with us in the comments below.

Interested in learning more about our training programs for adventure guides that we offer at camp? Learn more about out our Guide School and Adventure Guide opportunities here

About the Author: Sydney Roemer

Sydney has worked for Rock-N-Water for over 5 years and loves the amazing opportunities this camp has given her to be involved in ministry and sharing God's love with others. She loves getting outside and exploring God's creation. Writing has also been a passion of hers and she is thrilled to be able to share her love for the outdoors and God's truth with you through the Rock-N-Water Blog.